The climatic context before and after budbreak plays a very important role in shaping the vintage effect. Temperature accumulation and soil moisture availability initialize the plant cycle with carry over consequences that can last until harvest.

Abundance or scarcity of water in the ground will affect root activity. From the pure perspective of vineyard water use, soil evaporation after rain as well as cover crop transpiration will contribute to decrease the amount of water initially available for vine roots uptake.

During and after budbreak:

Temperature effect: scientific literature recently reported that under non-limiting soil moisture, maximal shoot length reached 200 days after budbreak increases with temperature regime between budswell and flowers appearance.
Soil moisture effect: a very sensitive plant response to soil moisture deficit is the speed of leaf area growth. Various authors have reported on vine leaf area development response to drought (main and lateral shoots). Monitoring leaf area growth during the early phase of vine development is a key vintage effect index to track down, particularly in the context of drier winter. In fact, leaf area development phase is one of the most strategic with a long lasting carry over effect until harvest. The amount of leaves the vine unfolds and exposes to sunlight will determine the timing and the severity of vine water deficit experienced later on during the season. For a same amount of water available, a larger exposed leaf area will lead to an earlier vine stress. 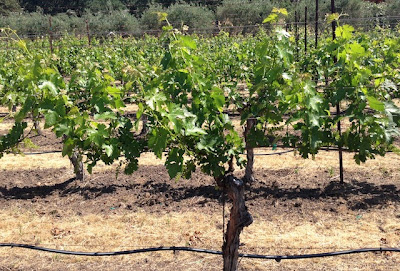 However, in practice, due to root reservoir size limitations, soil evaporation and cover crop transpiration during the dryer months of January through April, we could expect early vine shoot growth reduction in response to early soil moisture deficit. During that sensitive phase, careful monitoring of shoot elongation is particularly effective for the first weeks of “explosive” leaf development. Such information is key to reveal whether early shoot growth restriction is observed in response to the most recent and dryer months.

One can speculate that deep-rooted vineyards will not be affected by early water deficit during the early stages of plant development, whereas more shallow-rooted vineyards may express symptoms of water restriction during growth. Those environmental conditions set the stage for a vintage where differences in plant vegetative expression will greatly vary spatially.

To be continued…
Thibaut and Sebastien

The Vintage Report is a unique forum that aims to gather the industry’s most prominent vintners and scientists to discuss the previous vintage, present the latest innovative research and share technical advances in viticulture and enology.

The Vintage Report fosters <strong>innovation for sustainable advancements</strong> in winemaking through scientific presentations and lectures from the industry’s leading minds.

<strong>Check out for Vintage reports in your area <a href="https://www.vintagereport.com/en">here </a></strong>